Our goal is to promote and encourage the increase of bilateral trade relations in the DR-CAFTA region (United States, Guatemala, El Salvador, Honduras, Nicaragua, Costa Rica and Dominican Republic) through international trade and attracting foreign investment to the country, with the appropriate technical advice and focused on exports, imports and internationalization of companies.

Management of business appointments with potential customers/suppliers nationally or abroad.The purpose of this service is to help entrepreneurs to do business with national and foreign companies to buy/sell products/services that are relevant to the development and expansion of their company. Since AMCHAM is one of the leading entities in Guatemala, it acts as a business facilitator, handing over the benefit to the entrepreneur.
Specialized consulting in foreign trade. We have the support of specialists with knowledge in Free Trade Agreements, regulations and market access requirements, duty information, customs, among other issues related to international trade.Talks and events aimed to promote trade, attract investment and internationalization that drive business development and foster international trade relations.
Service created with the purpose of providing American companies with general, financial, commercial and reputable information about Guatemalan companies and vice versa.To reduce the risk when investing or doing business with the counterparty in another country.
We offer technical analysis according to FDA regulations on food labels to be exported to the United States.FDA consultancy for applicable sectors: Food, Cosmetics, Over The Counter Drugs (OTC), Dietary Supplements, Drugs, Medical Equipment.
Creation of contacts lists with potential customers or suppliers of the product or sector of interest.
We provide general business advice and support with market studies and basic information on the different states of the United States; investment procedures, statistics, economic indicators, and more.
On a weekly basis, the Trade Center Department informs people about new and important events that have taken place in the United States, providing information on economy, trade, politics, migration, etc. Contributing to commercial standards, business competitiveness in Guatemala, investment outlook, and more.
Approach counterparts in the United States to promote internationalization and foster Guatemalan companies.Some of our alliances:

Why the United States?

The United States is Guatemala’s first trading partner with an approximate 30% share of total exports and around 40% of imports. There are great opportunities that can be taken advantage of when entering the U.S. market and that is why AmCham encourages the internationalization of companies and product diversification. 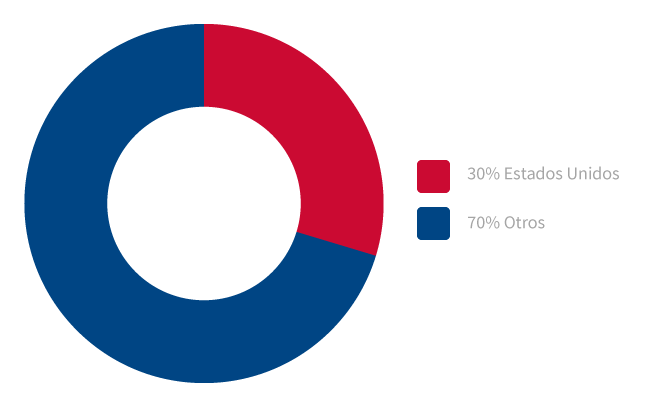 The DR-CAFTA (Dominican Republic-Central America Free Trade Agreement) is a bilateral agreement that seeks the creation of a free trade zone between the signatory countries. The Treaty entered into force on July 1, 2016 and represents a great trade opportunity for Guatemala, fulfilling the following objectives:

DR-CAFTA: Was negotiated between January 2003 and January 2004 (CAFTA), to which the Dominican Republic joined in July 2004 adapting, at that time, to the acronym DR-CAFTA.

WHAT DOES DR-CAFTA MEAN?

DR-CAFTA is the first free trade agreement between the United States and a group of smaller, developing economies. This agreement creates new economic opportunities by removing customs duty, opening markets, reducing barriers to trade in services, promoting transparency and establishing leading edge rules for 21st century trade by facilitating trade and investment between the parties and increasing regional integration.

WHICH COUNTRIES ARE PART OF THE DR-CAFTA?

WHEN WAS IT SIGNED?

ENTRY INTO FORCE OF THE TREATY:

It is divided into 22 chapters, each consisting of a series of articles and definitions, with its own features contained in the annexes and appendices that constitute an essential part of it. These are:

The preface is formed by a series of 20 clear and precise objectives and actions that are intended to be achieved through the confirmation of DR-CAFTA. Some important highlights are:

The goals are to stimulate the expansion and diversification of trade between the parties; remove obstacles to trade and facilitate the cross-border movement of goods and services; encourage conditions of fair competition in the free trade area; increase investment opportunities in the territories; seek adequate protection of intellectual property; create effective procedures for the implementation and enforcement of the treaty and establish guidelines for bilateral cooperation.

It establishes the general and basic definitions for the understanding of the treaty, and through the chapter’s annex, country-specific definitions are included, of which you can highlight definitions such as: As for Guatemala, the annex defines Territory as: the land, maritime and air space under its sovereignty, as well as its exclusive economic zone and its continental shelf, over which it exercises sovereign rights and jurisdiction, in accordance with international law and its internal law.

Section A: Rules of Origin:

Rules of origin are the specific provisions applied by a country to determine the origin of goods. Only original producers can benefit from customs duty preferences, their purpose is to avoid third countries benefiting from non-agreed preferences (triangulation). These are minimum processing requirements that imported materials must meet to produce originating goods, criteria, value of regional content, possibility of accumulating origin in the region that serve for the protection of raw material and final goods of the countries.[1] The origin criteria are: When the origin of a product has to be estimated through the regional content value, the methods and calculation formulas are explained in the Treaty. There are three methods:

Safeguard: is a measure arising from the reduction or elimination of a customs duty, a good originating in the territory of a party in large quantities and causing threat or serious injury or a threat thereof, applicable only during the transition period (10 years from the entry into force of the treaty as these are): [2] The Ministry of Economy has material on the Frequently Asked Questions of the Rules of Origin. Available online: http://www.mineco.gob.gt/sites/default/files/preguntas_frecuentes_reglas_de_origen_en_formato_iso_ii.pdf[3] The Chamber of Commerce of Guatemala has published on its website a manual for filling out the Certificate of Origin of the Chamber of Commerce of Guatemala. Available online: http://ccg.com.gt/web-ccg/certificados-electronicos-de-origen/[4] The Chamber of Commerce of Guatemala, on its website has the requirements and costs for the authorization of a Certificate of Origin. Available online: http://ccg.com.gt/web-ccg/certificados-electronicos-de-origen/

For more information on how we can support you in doing business with the United States and the region, please contact: Carolina Barrientos Phone: 2417-0805 cbarrientos@amchamguatemala.com